Letter to the National Cancer Institute

This month, 20 sarcoma advocacy organizations sent a letter to Dr. John Niederhuber, director of the National Cancer Institute, petitioning the NCI to prioritize funding for sarcoma research. The letter referred to President Obama’s renewed call for finding a cure for cancer, and the Obama/Biden initiative to include a focus on rare cancers.
In the past, sarcoma research has not been a priority of government funding. For example, the sarcoma community worked with NCI to develop the Sarcoma Progress Review Group. This group published a report in 2004, but the recommendations have not been adequately implemented.
As another example, cooperative groups are funded mostly by NCI, and when funding was reduced for these groups in the past few years, they eliminated clinical trials for rarer cancers including sarcomas. Right now (based on a search on www.cancer.gov) major adult cancer cooperative groups such as SWOG, ECOG and CALGB have no frontline treatment clinical trials open for sarcomas.

The letter asked for the following research aims to be implemented:
• That sarcoma be added to those cancer types evaluated as a part of the NCI Cancer Genome Atlas Project.
• That new ARRA grant applications and other future grants pertaining to sarcoma are given preference.
• That sarcoma-related research grants currently approved but not fully funded by NCI be funded up to levels requested in the original applications.
• That new funding for expanding research training opportunities include a focus on sarcoma.
• That new investigator funding include a focus on sarcoma.

The American Recovery and Reinvestment Act (ARRA) greatly increases funding for NCI, which in turn provides the opportunity to greatly increase funding for sarcoma research. The sarcoma community spoke with one voice in requesting that NCI consider sarcoma to be a priority. It will be up to us all to continue advocating for this goal.

Recently IDM Pharma, announced that mifamurtide (known as MEPACT® in Europe), a new class of therapy for the treatment for metastatic, non-resectable osteosarcoma received Centralized marketing authorization from the European Commission. This means that mifamurtide - the first new treatment for osteosarcoma in more than 20 years - can now be marketed in the 27 Member States of the EU, as well as in Iceland, Liechtenstein and Norway.

IDM continues to work on bringing this important treatment to the United States. They have Compassionate Use trials taking place at MD Anderson Cancer Center in Houston and Memorial Sloan-Kettering Cancer Center in New York. They continue to work with the Children’s Oncology Group, as well as external experts and advisors to gather patient follow up data from the Phase 3 clinical trial of mifamurtide and to respond to other questions in the non-approvable letter the Company received from the U.S. Food and Drug Administration (FDA). Given the outcome in Europe, they expect to submit an amended New Drug Application (NDA) in the first half of 2009.

Results from the largest Phase 3 trial completed in osteosarcoma, enrolling approximately 800 patients, demonstrated that the addition of mifamurtide to chemotherapy resulted in approximately a 30 percent reduction in the risk of death. In addition, overall survival after six years of follow-up in patients treated with chemotherapy and mifamurtide was 78 percent, compared to 70 percent in patients treated with chemotherapy alone.
Posted by Sarcoma Alliance at 1:52 PM 1 comment:

Since 1999 the Sarcoma Alliance has been helping everyone affected by sarcoma. In 2009 we proudly celebrate our 10th Anniversary of providing guidance, education and support to the newly diagnosed, long term survivors, family members, caregivers and friends. The focus on this mission has not wavered during these years and will continue so that early diagnosis is the norm, and everyone receives care in the most appropriate setting to assure the best possible outcome. We will continue to help and connect the sarcoma community for support and education. Finally, we and all the other individuals and sarcoma organizations will never rest until there is a cure for all. Please visit our website to see what we are doing and celebrate with us by purchasing our special edition 10th anniversary t-shirt.

Thank you to everyone for your support and endless efforts on behalf of the sarcoma community. Please let us know how we can do more.

Arthur Beckert,
Executive Director
Posted by Sarcoma Alliance at 11:48 AM No comments: 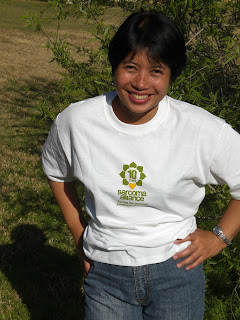 Some of you love our green T-shirts that ask: “What the hell is a sarcoma?” on the front, with the answer on the back. But others didn’t like the use of “hell.”
We’ve now designed a white shirt, with yellow and green lettering, that simply has our 10-year anniversary logo on the front. The back reads: “Sarcoma is a rare and aggressive cancer that strikes over ten thousand Americans every year. Early diagnosis and proper treatment are crucial to survival. The Sarcoma Alliance provides immediate education, guidance and support at www.sarcomaalliance.org for those in need.”
We’ve also added a small size. (Our green ones are in M-XL.)
If you want to order a T-shirt, click here. Your donation goes to help fund our programs. But our T-shirts do more than raise money; they also raise awareness. I wish I had known something about sarcoma when I was diagnosed in 2002.
You might think that people are so familiar with the Internet these days that they find resources right away. But I remember how overwhelming it was when I was diagnosed even though I was accustomed to researching. I talk to people all the time who didn’t know that they could connect easily with others with sarcoma.
I’ve decided to run photos of Sarcoma Alliance supporters in their T-shirts, in hopes that will encourage others to get the word out.
Modeling our new shirt is Zita Rarastesa of Solo, Indonesia, who is working on her doctorate in English in Tampa, Florida. Sporting our old shirt is Mary Hestand, who works at the University of Texas Southwestern Medical Center in Dallas. Yes, she really is buried in the sand on South Padre Island, Texas.
-- Suzie Siegel 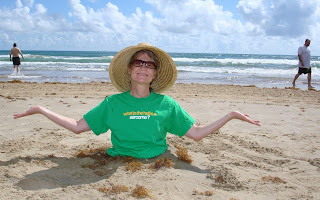 As a member of the Sarcoma Alliance I’m so proud that we are involved in Charlie Lustman’s “Made Me Nuclear” show http://www.mademenuclear.com/ (turn on sound). Charlie Lustman was a professional musician when he was first diagnosed with osteosarcoma in 2006 and became a patient at Cedars-Sinai (Dr. Charles Forscher) in Los Angeles. I exchanged a couple of emails with Charlie about me attending his September 2008 premiere for the Sarcoma Alliance (SA) and we went from there. At the time I didn't know much about Charlie. I arrived in Santa Monica for the opening night (Thursday) and found I wasn’t on the ‘will-call’ list, but Sandra (will-call) let me in because I had the Sarcoma Alliance brochures, then gave me a program and seated me. I looked at the program and on the cover page was “Made Me Nuclear, presented by the Sarcoma Alliance, Santa Monica Playhouse 2008”. (That’s ALL that is on the cover page) The Made Me Nuclear show is a ‘pop operetta about surviving cancer’ as is described at http://cdbaby.com/cd/charlielustman2 (where you can read his osteosarcoma survival story and listen to a portion of each of the songs on the entire 'Made Me Nuclear' CD and purchase it if you want), and the songs in the show and CD follow the chronology of Charlie’s path from diagnosis to being declared cancer free. The show includes his comments between the songs.

The show is GREAT! Made Me Nuclear is a one-man show in a Community Theater. Most of the songs are upbeat, uplifting, and inspirational (my caregiver opinion). The show starts with “The Call” (‘we found CANCER’) followed by “Made Me Nuclear” and “Dr. O” about staging scans and surgical planning. “Are you Afraid” is the obvious next step. Charlie then has surgery, wakes up and describes his outlook in “Surreal to Me”, and then going through 20 rounds of chemo in “Stickin’ around”. “Come Inside” seemed psychedelic and (perhaps) how Charlie felt under the effects of adjuvant chemotherapy. “Chemo Brain” is self explanatory. In “Somebody New” Charlie states how he is starting his 'post-treatment' life again as ‘somebody new’, but DIFFERENT. “Just When I Needed You” is about his daughter who was born in the same hospital but 3 floors above him while he was in treatment. “Do What You Love” describes Charlie’s new outlook after completing his treatment, and “A Simple Song” is thanking the doctors, nurses, friends and family for their help during his sarcoma journey.

To tell the truth, I had tears during the first song “The Call” as I
Posted by Sarcoma Alliance at 6:16 PM No comments: