No. 1 in the Catalina Classic 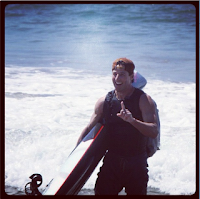 Competing in the Catalina Classic Paddleboard Race for sarcoma patients last month, Steve Shlens took first in the stock category, for boards no longer than 12 feet.

"I put a lot of time and effort into this year's race and it fortunately turned out well. I managed to finish in 5:56:03, just 32 seconds short of the all-time stock board record set in 1999 by Gary Fortune. I believe it's the third-fastest stock board crossing in the race's history."


The 32-mile race from Catalina Island to Manhattan Beach in Los Angeles County began in 1955. This was the first time that Steve, above, raced as part of Ocean of Hope, the Sarcoma Alliance's biggest fundraiser. It started at the Catalina Classic in 1999, and now consists of paddleboard and outrigger-canoe races across the country.

"This is THE race, the original distance paddleboard race which started in 1955. This is the one to which all others are measured, judged, and compared," Steve wrote on his blog.

"I was completely spent by the end of the race," "But I know anyone who is fighting a sarcoma, or any disease, would have gladly changed positions with me. It's why I joined O2H in the first place, hoping I could help others and make a small bit of difference for them.

"I had a goal of raising at least a thousand dollars and was thrilled that I met that goal. My contributors are all very special people so this meant a great deal. I also was honored to place the names of real fighters on my board -- to paddle with them across the channel.

"I'm thrilled to have been a part of this team effort!"

If people raise $3,000, they can have their name on a paddleboard. Steve had Suzanne Leider's name on his board. O2H co-captain Aimee Spector had Bob Chambliss and Tracey Talley, and Phil Ambrose had Wendy Sommers and Josephine Schiavo. I was thrilled to have my name on Steve Shikiya's paddleboard. All of the boards also carried a sticker for Laura Sardisco, who had surgery for breast cancer. She is the wife of co-captain Fred Sardisco.

Of the 77 paddlers, Steve Shikiya was 23rd overall, paddling in the unlimited class, which dominated the water. Mike Rogers and Joel Pepper trained this year, but injuries kept them from racing.


"In the middle of the channel, the water was very warm and super clear. Seeing the fish below me, I was mesmerized, but I had to take my eyes off it," he says, and focus on the race.

"It felt like I was really racing, not just participating and finishing. I felt really good. I was racing against myself. I feel like I could do it all over again," he said the day after the race. "I feel strongly about doing better next year."

Aimee did what few women have. She was one of seven women in the Classic, the most ever, and she placed third among them.

"I felt honored to be out there with so many incredible athletes. I will definitely be out there again ... in a couple of years."

She finished just after famous board shaper Joe Bark, who donated two paddleboards to the Ocean of Hope this year, as always. One was raffled off after the Classic; the other had been claimed at the Cold Hands race this spring. They brought in $3,000.