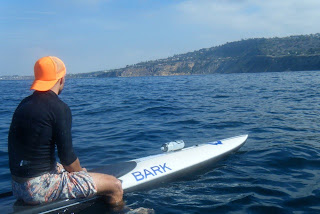 Joel Pepper decided to compete in the Catalina Classic Paddle-board Race to help sarcoma patients -- before he knew that sarcoma was the cancer that killed a family friend this year.
Ocean of Hope stickers on paddleboards caught his eye last year. O2H team members compete in ocean races to raise money for the Sarcoma Alliance, which provides guidance, education and support to patients, families and friends.
Joel was looking for an organized team with nonprofit status. He emailed Arthur Beckert, executive director of the Alliance, "to make sure this wasn't a scam using cancer to pad people's pockets. When I got his response that this charity was about helping cancer patients and not administrators, I was very interested. I nearly paddled for O2H last year."
Instead, he competed in the Classic to raise money for his friend Lisa Griewisch, now in remission from leukemia. This year, however, he will join 10 O2H paddlers in the 32-mile race. They can count on at least 20 crew members on boats and 30 on Manhattan Beach, Calif. This is the 11th year that the team will compete in the Classic, its biggest fundraiser.
I asked Joel what led him to paddleboard races.

"I got tired of surfing terrible waves just to be in the water every day. There were days where I'd take out a longboard and just paddle for exercise up and down the beach instead of dealing with our meager summer surf. I wound up buying a SUP from Joe Bark, and then I realized how miserable it is to paddle a SUP into the wind! I demo'd a prone board for the first time the day after the 2008 Catalina Classic. Went 8 miles with no rash guard, out around the r10 buoy. Came in with a bloody chest from the pad rubbing, but I was hooked."

He runs races in the winter and then starts paddling in March,

"building to the first crossing of the year in June, the Rock 2 Rock race. The summer means more and more miles. My max week this year was 2 weeks ago, with 49 miles paddling, 5 miles running and 2.5 miles swimming. Everything revolves around training for those few really big weeks. Now it's winding down. Maybe 20 miles per week to let the body and mind recover ..." 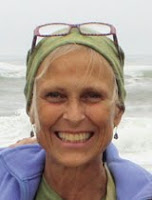 Joel, who lives in Redondo Beach, will race in honor of Janet Lasley, who died in May in Princeton, N.J.

"My buddy's Aunt Janet's passing this year was a tough one. We went to the Jersey Shore with their family growing up, and Janet was the best person ever: full of energy, positive, upbeat at all times, extremely successful and loved by all. She gave me a new perspective on what being an adult could be. It's not as if we were ever particularly close, but I always held her in really high regard as someone to be like. She fought and clawed and got cut to hell all the time for years after [being diagnosed], fighting tooth and nail to see her oldest become a teenager at least.

Janet had survived for more than 12 years with leiomyosarcoma, a cancer of the smooth muscles. "I never knew it was a sarcoma until today when I had to ask what specific type of cancer it was," Joel wrote. "Quick Google search = disturbing. Nature is ruthless." I got chills when I read his email because I'm an 8-year survivor of leiomyosarcoma.
Many of us can identify with the way Joel describes life on the ocean:

"Learning to deal with adversity/pain/discomfort. Finding strength you never knew you had. Coming to grips with the fact that there are big fish in the ocean that may kill you at any time if they so decide, so you may as well not worry about it and just keep paddling. Getting to really know your paddling partners. Making friendships with people that you KNOW you can count on. Feeling the difference attitude makes in life first-hand, when you go from feeling like you can't go another stroke to feeling like you could paddle to Japan and back when a pod of dolphins decides to swim around and under you in an early-season paddle.

"I seriously feel like I owe everyone out there sitting in chemo, radiation, disability and poverty to just suck it up and do it." 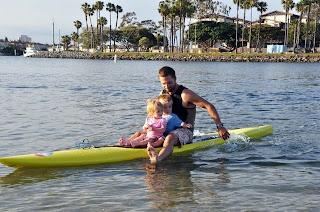 If you want to donate for the race, click here. On that same page, you also can search for an individual paddler. Joel's page is here.
In the top photo, Joel faces the Palos Verdes peninsula. Next is family friend Janet Lasley. Joel's kids, Erin and Owen, accompany him in the bottom photo.
-- Suzie Siegel, board member
Posted by Sarcoma Alliance at 7:43 AM No comments: 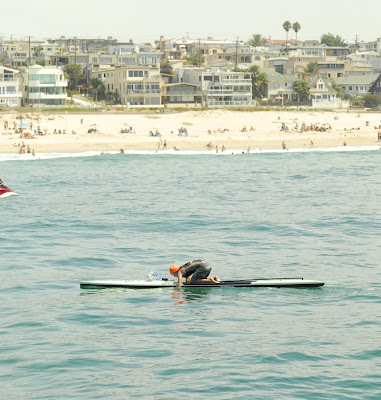 This is a photo of Joel Pepper at the end of last year's Catalina Classic. This year, we're delighted to have him paddling for the Ocean of Hope team, which raises money -- and morale -- for us.
I'll post more details shortly, but I can't resist these photos of the ocean. For me, summer has been one long hot-flash. Some of you know what I mean!
-- Suzie
Posted by Sarcoma Alliance at 3:22 PM No comments:

Mark your calendars for CancerCare's free telephone workshop, "Treatment Update on Soft-Tissue Sarcoma," 1:30-2:30 p.m. Eastern time on Tuesday, Sept. 21. The speakers will be:
The speakers will give an overview of soft-tissue sarcomas and discuss the current standard of care and new treatment approaches, symptom and pain management, clinical trials, and much more. The half-hour presentation will be followed by a question-and-answer session, moderated by Messner.
Click here to register, or call 1-800-813-4673.
Posted by Sarcoma Alliance at 11:15 AM No comments: