Join the Ocean of Hope Aug. 25 at the Classic 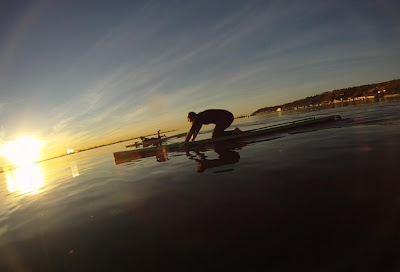 In 2011, when Robert Phelps was 20, his father was diagnosed with terminal brain cancer.

"I started paddling during this tough time to help myself." His father passed away this April. "Now I am paddling to help other people."

I'm going to tell you a little about Robert Phelps (above) and John Kucera, two new members of our Ocean of Hope (O2H) team. But first, I want to encourage anyone in the Los Angeles area on Aug. 25 to join us at the Catalina Classic Paddleboard Marathon.

Volunteers can come at 9 a.m. (If you want to volunteer, send an email to abeckert@sarcomaalliance.org.) The crowd arrives around 10:30. Paddlers will begin to come ashore around 11 if the winds and tides are good.

Meet other families at our bright-yellow tent, where we will have food, drinks, merchandise and raffle tickets. Once again, we will be raffling off a fast and sleek board by Joe Bark.

If you can't make it, but would still like to support O2H, click on paddleboarders and outrigger team members. O2H is the Alliance’s largest fundraiser and consists of paddleboard and outrigger-canoe races across the country. The paddlers also raise much-needed awareness about sarcoma, and everyone at the Alliance is grateful to them.

At the Catalina Classic, each paddleboard bears the name of someone we honor. People who donate $1,000 or more can have their name or the name of another on a board next year.

The frontrunner in donations is Robert, who has raised more than $5,000. He will have the name of his father on his board. He competed in the Classic last year, but this is his first year on the O2H team.

"I was very impressed with the organization and wanted to be a part of it," said Robert, a lifeguard for the city of Coronado. He grew up sailing, fishing and surfing.

"My dad was a lifeguard in the late 70's and was very instrumental in getting me into junior lifeguards from age 9-16, when I got my first lifeguard job for California State Parks at Silver Strand. I've always loved being in, on or around the water."

Another new team member is John Kucera of Dana Point. On his board will be the name of his mother, his fiancée Christi, and Bob Chambliss, the only person with sarcoma who has attempted the race.

"When I lost my mother, Lucy, to a seven-month battle with pancreatic cancer in 1993, I became painfully aware of how devastating cancer can be. Then, just last year my fiancée, Christi, was diagnosed with leiomyosarcoma, and I again experienced firsthand the ups and downs and fears and hopes of cancer."

Christi has a good prognosis after a hysterectomy for leiomyosarcoma. Like others, she and John discussed how invasive a surgery she needed, before they knew whether it was cancer or not. They talked about complementary medicine and treatment after surgery.

"It was a very, very difficult year," he said. "We were planning to have kids."


Unlike most people, John had heard of sarcoma before. At the beach in 2006, he met Mark Schulein, former O2H captain, and he donated to O2H. "We shake our heads over this -- I'm not sure what to call it -- divine providence?"


John has long loved open-ocean swimming, and he was a lifeguard at Newport Beach in the 1980s. He entered the Classic once before -- 25 years ago. He lived out of state for years, but moved back in 2001-2002 and began to train and coach other paddleboarders.

"A lot of people pestered me, saying, 'You work so hard you're nuts if you don't do [the Classic again].' I love paddling, and I was looking for a significant date to do it."

He wrote on his Active.com page: "In my 1988 crossing, I placed 2nd in stock 12' class, and 10th overall with a time of 7 hours and 28 minutes. Today, the top 10 finishers will likely reach Manhattan Beach pier well under 6½ hours.

He reminds us to have hope.
Posted by Sarcoma Alliance at 6:39 PM 1 comment:

We have high hopes for an experimental drug, TH-302, being studied around the world.

"I'm very confident of this drug in sarcoma," said William Tap, MD, section chief for sarcoma oncology at Memorial Sloan-Kettering Cancer Center in New York. He gave an update on TH-302 in June at the American Society of Clinical Oncology’s annual meeting. The first findings may be available next year.

Ninety-six cancer centers in the U.S., Canada, Europe and Israel have signed up for the clinical trial, according to the National Institutes of Health. “Australia is coming aboard soon,” said Dr. Tap, the trial’s principal investigator.

Having this many study sites is amazing, compared with sarcoma research a decade ago, he said. The study is being done by Threshold Pharmaceuticals in conjunction with SARC (Sarcoma Alliance for Research Through Collaboration). (SARC is sometimes confused with the Sarcoma Alliance, but it's a separate nonprofit for physicians and scientists.)

Dr. Tap said 338 patients have enrolled in the TH-302 trial so far, with a goal of 620. In one arm of the phase 3 trial, patients get doxorubicin (Adriamycin) and TH-302. In the other, they get only doxorubicin. Patients are selected at random to go into one arm or the other. He said the trial is enrolling patients who have intermediate- and high-grade soft-tissue sarcomas for which doxorubicin is an appropriate front-line regimen.

Some critics have suggested that clinical trials be limited to only the sarcoma subtypes that show the greatest initial response. But Dr. Tap said he wouldn’t want to focus on one or two subtypes while other patients who might have responded go untested.

Some recent drug studies have looked at progression-free survival, i.e., how long a patient lives without the sarcoma returning or advancing. The TH-302 trial looks at whether patients live longer, Dr. Tap said.

“In sarcoma, in more than 30 years, we haven't had a new drug that we believe affects overall survival," he said, except those used for gastrointestinal stromal tumors.

"They're different drugs,” Dr. Tap said. “It's like comparing apples and oranges. The key is the delivery method."

Unlike palifosfamide, TH-302 activates in tissue with low oxygen, and those conditions often exist in the center of a sarcoma, he said. This differs from other drugs that attack the edges of tumors, which have more blood vessels and thus, more oxygen.
Posted by Sarcoma Alliance at 2:05 PM No comments: