Here is a link to an article about being single and facing a cancer diagnosis. Sharon, a sarcoma survivor, was interviewed for the story.

BY MARC SILVER
CureToday.com Winter 2008
Posted by Sarcoma Alliance at 3:32 PM No comments:

People with rare cancers, such as sarcoma, may have different needs when it comes to patient relations and education.
A person diagnosed with a common cancer has a much better chance of knowing someone who survived that kind of cancer. But people with sarcomas may end up comparing their cancer to someone with a different cancer, and that can lead to all sorts of misunderstandings.
For example, carcinomas usually are identified by the site where they originate, such as “breast cancer” or “thyroid cancer.” This differs from sarcoma, which often is named for the cell it most resembles. This can cause confusion, not just for the patient, but also for health-care workers who aren’t familiar with sarcoma. A woman with angiosarcoma in her breast may understand only that she has cancer in her breast, and a patient educator may give her material on “breast cancer.”
The confusion is compounded by the fact that there are at least 50 different subtypes of sarcoma, which often behave differently and are treated differently.
Let’s say Jane goes to the local hospital, where a gynecologist discovers her “fibroid” is uterine leiomyosarcoma (ULMS). She talks to a friend who had radiation and chemo for breast cancer, and Jane begins to wonder why her doctor didn’t offer those options to her.
She decides to get a second opinion from a comprehensive cancer center. When she calls to make an appointment, she tells the scheduler that she had cancer in her uterus. She is referred to gynecologic oncology.
Jane reads about uterine cancer (carcinoma) on the Internet, and some things don’t make sense to her. At the patient education center at the cancer center, she gets more information on uterine cancer (carcinoma). In the gyn clinic, there are no brochures on sarcoma.
Finally, she understands that she has sarcoma. She discovers the Sarcoma Alliance, and she learns that her cancer center has a sarcoma department. Although she likes the gyn oncologist she sees, she’s outraged that she didn’t have the option of seeing someone in sarcoma. She complains to patient relations. She learns that she always had the option of seeing doctors in both gyn and sarcoma -- she just didn’t know it.
If health-care workers are attuned to the existence of rare cancers, they can head off confusion and anger in patients.
-- Suzie Siegel, board member
Posted by Sarcoma Alliance at 2:01 PM No comments:

Following is a report from Dave Murphy who visited Russia after attending the annual meeting of the Connective Tissue Oncology Society meeting in London.
While on vacation in Europe I visited Katerina Kiseleva, Executive Director of Parents and Children Against Cancer (CAPAC) http://www.capac.ru/ in St. Petersburg Russia. Katerina arranged for me to visit the pediatric cancer ward at City Hospital #31, Dept of Pediatric Oncology/Hematology. Picture is of me with Dr. Margarita Belogurova, head of the department (note Sarcoma Alliance brochures and 'Sarcoma Knows No Borders' wristbands on the desk). 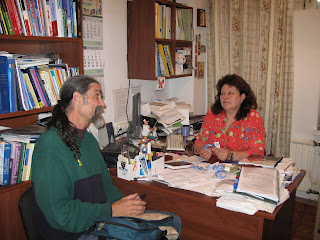 We also visited the National Scientific Research Institution of Oncology. Picture is of me with Dr. Yuriy Punanov, head of their pediatric department. 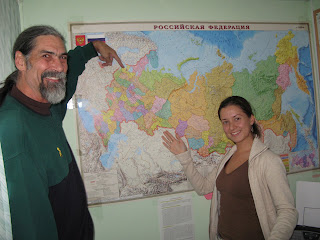 I talked about the CTOS conference, and the iSPAN meeting before the conference. The obvious first question I was asked was "you only do this for people in your countries, don't you?" and my response was that the SA programs and services are for ANYONE with sarcoma in ANY country, and also that the efforts of other sarcoma organizations raising funds for research would benefit sarcoma patients worldwide.

Each of them allowed me to be escorted into the wards and meet each child in the ward. I met a few sarcoma patients, osteosarcoma, both recent amputees, and talked with some of the doctors in the ward. I gave out California calendars and Halloween candy and briefly spoke with the children and parents in each room (with Katya translating).

Children and Parents Against Cancer is an organization that helps ALL pediatric cancer patients. On each visit Katerina brought her organizations brochures and some gifts. She explained how CAPAC provides some assistance to some of the families, and arranges for excursions for some of the children out of the hospital on short trips around St. Petersburg, and trips to other countries like Ireland http://www.barretstown.org/ and the US http://www.holeinthewallgang.org/ .

When I spoke of the sarcoma chat I was introduced to the person that answers Russia's pediatric cancer hotline.Overall I was well received by everyone I met and I felt they were surprised that I was interested in visiting their facilities.

Then I started playing the tourist. The next picture is of me in the garden of Catherine the Great's Palace at Pushkin outside St. PetersburgDave Murphy 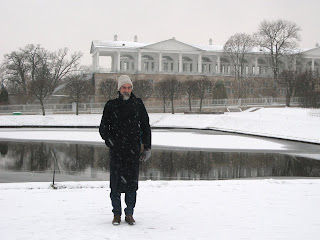 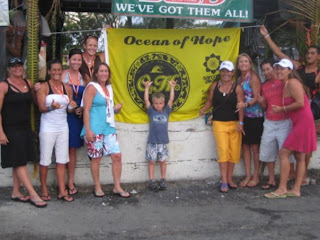 The Lanakila Outrigger Team raised over $6,000 for the Sarcoma Alliance this past summer! For a report on their adventures see our Fall 2008 newsletter.

Posted by Sarcoma Alliance at 1:46 PM No comments: