Catalina Classic: The guy who finishes 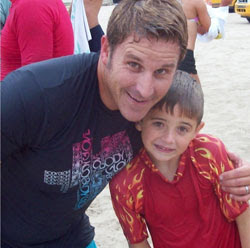 For three years, Phil Ambrose has raised money to help sarcoma patients. This year he helped one by telling her about the Sarcoma Alliance.

"Six weeks ago, a friend's wife was diagnosed with sarcoma," says Phil, in the photo with his son Caden after a tandem event. "It was quite the life-changing event.

"Things are looking great for her now, but in the first few weeks I put them in contact with SA and they were stoked with the response. They were very happy with the information on second opinions."

Phil paddles in the Catalina Classic Paddleboard Race for the Ocean of Hope, the Alliance's largest fundraising campaign. Joining him this year will be Joel Pepper, Steve Shikiya, Steve Shlens, Tyler Resh and O2H co-captain Aimee Spector. Fred Sardisco, the other co-captain, and Mike Rogers will be helping on the beach.

The race will be Aug. 26, and O2H will have food and merchandise under its tents on Manhattan Beach in Los Angeles County until 3-4 p.m. Anyone who wants to help with the set up should come at 8 a.m.

I went last year, and it was great to talk to other sarcoma survivors and hang out on the beach. Board shaper Joe Bark donates paddleboards each year for our raffle, and they are a work of art. 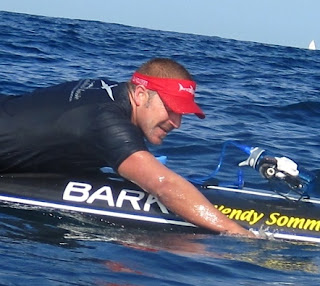 People who raise $3,000 can have their name or the name of a loved one on a paddle- board. In the photo, Phil's board carries the name of Wendy Sommers, one of the founders of the Sarcoma Alliance.

“This year things are very busy for me with work and family, but O2H has drawn me back in,” says Phil, who lives in Rolling Hills Estates and works as a firefighter and paramedic. He also has his own hazmat-training company based on a patent-pending training system. “I’ll find time to train for the Classic, I’ll finish the race, and I’ll pray that there are no new names to put on our boards."

He fits in most of his training when his two sons are in school. He has less time in the summer -- when most paddleboard races are held. "Do the math," he says.


"I'm hardly the super athlete. I'm the guy who finishes."

Boats bring the paddlers to Catalina Island in the predawn dark, and the 32 miles to Manhattan Beach is a "super marathon."

"It's not like someone walks 5 miles to raise money. The crossing has unpredictable currents. And sharks. But boats are the biggest problem. In the back of the pack, there are more boat wakes and, as time goes by, the conditions may worsen. Good news is I don't have to ask for directions.

"I call it the last frontier."

"My first year, I was dead last ... well, the last male." He had heat stroke by the time he came ashore. During the second race, "I vomited for the first three miles. Last year, I got seasick on the way over."

"My mother had leukemia, and now she's doing great. Crossing the channel, even on the worst day, is nothing compared to what people with cancer go through."

Phil learned about O2H and the Sarcoma Alliance after noticing the logos on paddleboards and asking Fred, "a great guy."

"It's a true volunteer organization. I'm proud to be a part of it." He says he also enjoys "the common bond with the ocean-centric group.”

"Water is my passion. I love getting in the water."

Follow the fun on Facebook. Donate to the paddlers here: http://www.active.com/donate/oceanofhope2012
Posted by Sarcoma Alliance at 4:17 PM No comments: 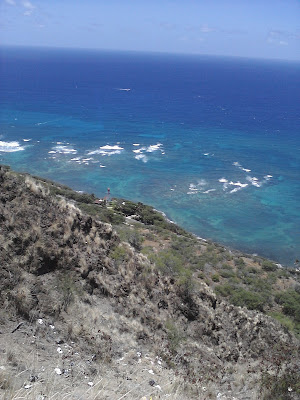 Ocean of Hope volunteers will do almost anything to get the word out - even "selling" the Sarcoma Alliance on Craiglist.

"Each year, the Sarcoma Alliance holds an Ocean of Hope (O2H) campaign in California that has raised over $600,000 in support for sarcoma patients and their families," read the ad. "This year, the Sarcoma Alliance & the Ocean of Hope will be coming to Oahu to host a tent at this year's Molokai 2 Oahu Paddleboard World Championships race. Come join us - be a part of this volunteer-based event and support the worldwide paddleboarders at the finish line!!!"

Danmerle Capati, O2H coordinator for the Islands, listed the July 29 event on the Aloha United Way website and placed the Craigslist ad.

"I thought it was a perfect (free) way to communicate that a Sarcoma Alliance community can be built locally in Hawaii," said Danmerle, adding that the listings brought in several people whose lives had been changed by sarcoma. "The Ocean of Hope campaign has some amazing athletes, and the paddling community has recognized their efforts. That's been a milestone." 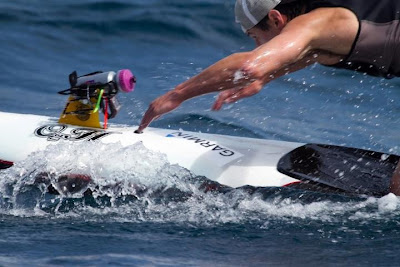 A new O2H member this year is Steve Shlens, a lawyer from Santa Barbara, Calif. Chris Aguilar took the photo of him, above. Dan Van Dyke took the one below. 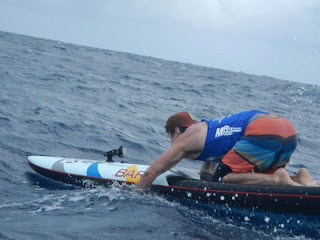 "Managed to get first in my division with paddle partner Dan Van Dyke of San Diego. We had a lot of fun with no expect- ations, so the award was a little bonus. This was my second Molokai race but the first time with O2H. I like the group, the cause, and feel proud to hopefully shine a bit of light on it." 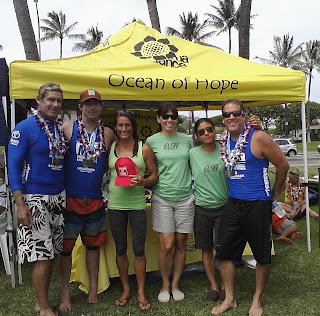 Growing up in South Bay, Steve Shlens said, "I paddled as a teen, got out of it, and began paddling again at 38.

"I did compete in a number of other races this year. Seven in all, I believe. Generally did well with second to Jack Bark in five and first in the others."

Next up is the Catalina Classic Paddleboard Marathon, "the grand-daddy of paddleboard races around the world. The original long- distance paddling endurance race."

O2H members Steve Shikiya of Palos Verdes Estates and Joel Pepper of Redondo Beach, who competed in Hawaii, will join teammates Aug. 26 for the Classic in Manhattan Beach, Calif.

O2H started in 1999 -- the same year that Mercedes "Mercy" Capati of Oahu's Ewa Beach was diagnosed with leiomyosarcoma.

Born in the Philippines, Mercy married a Navy man and settled in Hawaii, where she worked for the Defense Finance Accounting Service. Her kindness to another Navy wife was detailed in the story "Mercy" in "Chicken Soup for the Military Wife's Soul." Like others with metastatic disease, she had tough times, "but she had some really good times as well," daughter Danmerle recalled.

"She was such a fighter. I have always been proud of her."

Danmerle began volunteering for O2H in 2009, two years after her mother died.

"I'm all about patient advocacy and empowering people who need help the most," said the social worker and musician who now lives on the North Shore. She called the Alliance's Assistance Fund awesome for helping reimburse expenses for patients who seek a second opinion from an expert. She also praised the Peer-to-Peer Network, explaining that emotional support "is a huge part of treatment."

Posted by Sarcoma Alliance at 9:45 PM No comments: