This article appeared in the NCI Bulletin on October 20, 2009

Rhabdomyosarcoma (RMS), an aggressive childhood cancer caused by mutations in genes that control the development of skeletal muscle tissue, has often spread (metastasized) by the time it is diagnosed in children, leading to poor survival rates. Researchers have now identified mutations in the fibroblast growth factor receptor 4 (FGFR4) gene that are associated with metastasis and poor outcomes in patients with RMS.
The FGFR4 protein belongs to a family of proteins known as receptor tyrosine kinases, which are involved in cellular signaling processes that help regulate cell growth, maturation, and survival. The gene, the researchers believe, may provide a target for therapy. The results appeared online October 5 in the Journal of Clinical Investigation.
Researchers from NCI; the National Heart, Lung, and Blood Institute; The Children’s Hospital at Westmead, Australia; and the Nationwide Children’s Hospital in Columbus, OH, were involved in the project. Their previous research, and that of others, has shown that FGFR4 is highly expressed in RMS. Because the gene is active during muscle development and not in mature muscle, the team investigated whether expression of FGFR4 might contribute to RMS. Using mouse models, the researchers showed that the growth and spread of human RMS cells to the lungs was inhibited by suppressing FGFR4 expression. After sequencing the FGFR4 gene in human RMS tumor samples, they found that more than 7 percent of the tumors had mutations in the tyrosine kinase portion of the protein. Some of these mutations caused the protein to become overly active. Mutations that increase receptor tyrosine kinase activity have been found in other cancers, but the researchers note that this is the first time that mutations in a receptor tyrosine kinase have been found in RMS.
With a series of lab and animal studies, they confirmed that two of the FGFR4 mutations caused increased tumor growth, reduced RMS cell death, and enhanced the ability of RMS cells to metastasize.
The mutations, which were found in both types of RMS, alveolar and embryonal, appeared to act via the STAT3 pathway. Mouse RMS cells harboring these mutations were also more sensitive to treatment with drugs that inhibit FGFR4, which has “direct implications for personalized therapy and for patients with metastatic RMS, for whom long-term prognosis remains poor,” said lead author Dr. Javed Khan of NCI’s Pediatric Oncology Branch.
Posted by Sarcoma Alliance at 11:29 AM 1 comment: 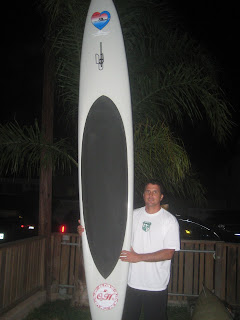 Thanks to Joe Bark, who donated this 12-foot paddleboard, won in our raffle by David Greenberg, a chiropractor
from Newport Beach and a good friend of Mark Schulein, former captain of Ocean of Hope.
"He was very excited to win the board," said Aimee Spector, one of this year's captains. "He had bought tickets for the raffle in the winter, and then this summer's raffle, and he says he'll keep buying more raffle tickets in any future raffle because he wants to support Ocean of Hope and, well, he has good luck!"
-- Suzie
Posted by Sarcoma Alliance at 6:29 PM 1 comment:

Go to the Web site for the South Bay Daily Breeze to see our yellow "Ocean of Hope" banner in photo No. 13, from the 2009 U.S. Paddleboard Championships. This was back in July -- I'm always late! -- but Dave Murphy says he was excited to be at Manhattan Beach, Calif., when fellow board member Jeff Bradbury came ashore. Events like this are a great place to educate people about sarcoma.
-- Suzie
Posted by Sarcoma Alliance at 6:16 PM No comments: