Finishing what you start 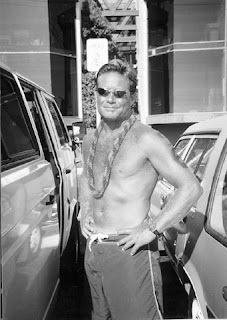 This black-and-white photo was taken in 2000, when Mike Rogers was 50. He had just completed the last of six annual Catalina Classic Paddleboard Marathons, and had raised almost a million dollars for cancer patients.

He took time off to care for his ailing father, and he gradually got out of shape. Two and a half years ago, he began training again.

"I'm back to my fighting weight."

Four months ago, however, he tore his right bicep, paddling around the R10 buoy near Palos Verdes in Los Angeles County. He adds: "I have really bad tendonitis in both arms. I ice them every night. It's an overuse injury." 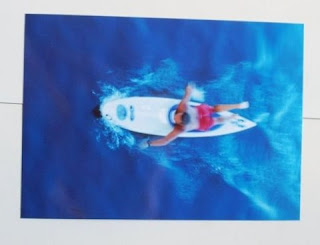 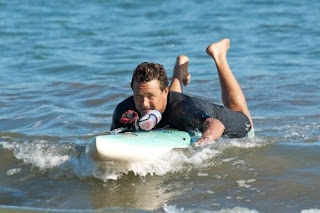 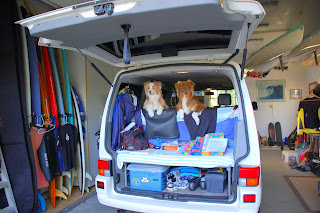 In the photo on the right, he makes his way under the Manhattan Beach Pier and, in the photo below, he comes in aching.


Luckily, he has a loving back-up team: his Australian shepherds, Makena and the red Angel, below.

Sunday, he will return to the Classic for the Ocean of Hope, a series of ocean races that benefit the Sarcoma Alliance. At 62, he will be the oldest O2H team member.

"I've been surfing my whole life," says Rogers, who was a linebacker in high school and college. He started paddleboarding in 1993. "In my 40s and 50s, I was a really strong paddler.

"One of the problems of the Catalina Classic is that it's so long and so hard. The quicker it gets done, the easier. The last 10 miles are pure hell." If you don't paddle hard enough, the current can pull the board backward. "I have dreams of paddling backward."

Supporting the Sarcoma Alliance, Rogers has discovered this rare cancer is not all that rare, at least not to O2H members, some of whom have lost friends and relatives. "Every story reinforces our cause; that it is greatly needed … and that we are truly making a difference.

"I love being in motion, and I love helping people," he says, explaining his motivation. Just as I post this, I get an email from him, with these words: "Five days to go for the old horse ... Manhattan never looks so good. It's about life, long or short … the wake we leave is all it boils down to. So, I paddle and try to help the ones less fortunate, one paddle at a time ... I hope my wake is remembered as a good one ... in the end …."

To keep him going, donate here.
-- Suzie Siegel
Posted by Sarcoma Alliance at 6:03 PM No comments: 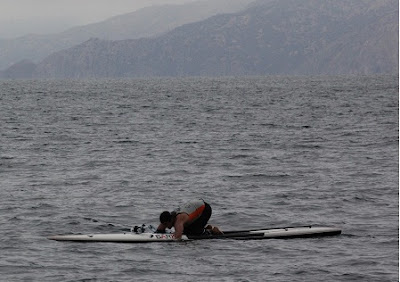 For a smart young athlete, the world may stretch out like a sea of possibilities.

"I went to college, worked a lot in my career, and went to grad school," Steve Shikiya says. Then cancer struck. He was treated for non-Hodgkin's lymphoma 2007-08.

"After treatment, your perspective changes so much. Life is short, and I'm more goal-oriented now. I live my life month to month."

This year he competed in the Cold Hands Paddle and the Rock 2 Rock Paddleboard and Stand Up Paddle Race, both at Cabrillo Beach in Los Angeles County. On Aug. 28, he will race in the Catalina Classic Paddleboard Marathon, ending at Manhattan Beach. He had never done these three before. Aimee Spector, co-captain of the Ocean of Hope campaign, asked why he wanted to take on the "holy trinity" of paddleboarding.

"Because I can do them right now," he responded. "I don't know about next year."

The long-distance races also attracted him, he says, because they feel "like something most people will never do."

The series of ocean races raises money and awareness for the Sarcoma Alliance. Shikiya raises funds to fight lymphoma, but he also decided to join O2H after talking to Phil Ambrose and other team members. He was impressed that the Alliance was so involved with the paddling community.

"I'm passionate about fighting all kinds of cancer," Shikiya says.

He's new to O2H, but not the ocean."I've surfed probably since I was about 4 years old, and I thought the worst part of surfing was the paddling.

"I've known Joe Bark since I was 5 or 6 years old." Two years ago, the well-known boardmaker offered to lend him a paddleboard, saying, "If you try it, you'll like it." About a month later, he talked to Charlie Hutchens of Joe Bark Paddleboards. "He's such a cool guy, and he spent so much time with me that I thought I had to try it." He did, and "from that moment, I was hooked."

"You can't surf all the time. But paddleboarding is different. You can pretty much do it any day. You can go anywhere you want," even places you can't go by boat. Plus, he adds: "I needed an excuse to do more exercising."

The Ocean of Hope helps keep the Sarcoma Alliance afloat.

"It has been an amazing road from when O2H started in 1999 with only one paddler … and a vision," says Mike Rogers, who will compete for O2H on Aug. 28 in the Catalina Classic Paddleboard Marathon, finishing on Manhattan Beach in Los Angeles County.

O2H members hope to raise $50,000 this year, bringing the 12-year total to $600,000. Just as important is awareness. The National Cancer Institute recognizes that sarcoma is “frequently misdiagnosed and highly underreported.” Patients -- and their health-care providers -- may not know all the treatment options or that nonprofits can help.

For the Catalina Classic, Rogers will join teammates Steve Shikiya, Joel Pepper, Philip Ambrose, Mark Schulein and O2H co-captain Fred Sardisco. Afterward, the team will raffle off a standup paddleboard donated by Joe Bark, with all proceeds going to the Sarcoma Alliance.

To contribute, go to this page.
-- Suzie Siegel
Posted by Sarcoma Alliance at 11:50 AM No comments:

Scott Gamble does his best for us 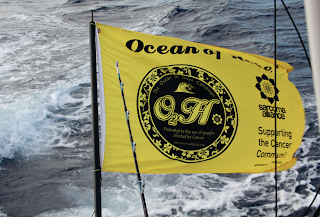 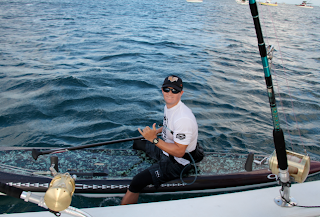 Scott Gamble flew the flag of the Ocean of Hope last month, when he won second place in the men's standup division of the Molokai 2 Oahu Paddle-board World Champion-ships.

"The wind, tide and swell were very good," Gamble says. "There were a lot of records broken! I beat my personal best by 30 minutes." 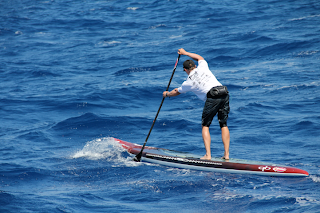 This is his second year to support O2H, a series of ocean races that raise money and awareness for the Sarcoma Alliance. He paddles in memory of his 22-year-old cousin, Dodge Ackerman, who had angiosarcoma and rhabdomyosarcoma. To support Gamble, check out his fundraising page.

Other athletes and volunteers assisted him and raised awareness about sarcoma. "I am lucky to have such a great cause and organization supporting me," he says.
-- Suzie Siegel 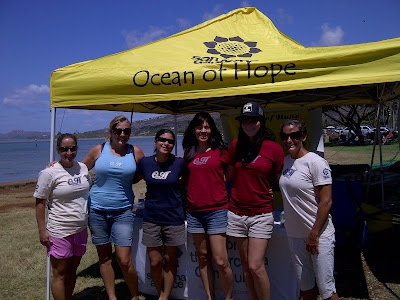 Posted by Sarcoma Alliance at 4:51 PM No comments: