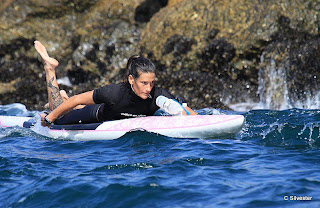 Aimee Spector of Redondo Beach is co-captain of Ocean of Hope.


By Suzie Siegel
Waterman’s Applied Science Paddle for Humanity has named us a charity partner for this year’s five events, beginning April 28 in Dana Point in Southern California. The series will continue June 2 in Deerfield Beach, Fla., near Boca Raton; July 7 in Lake Tahoe, Calif.; Aug. 25 in Washington, D.C.; and Sept. 15 in Austin.

When paddlers register, they can designate their favorite charity, which will get 20 percent of their fees. Net proceeds from the events also will be divided among the charity partners. We are grateful for this opportunity to raise funds and awareness.

In Dana Point, we'll have a tent on the beach for paddlers and anyone interested in talking to sarcoma survivors or learning about sarcoma. People who want to paddle need to register by April 26.

“This is a super-fun and beginner-friendly event,” says Spector. She and Ocean of Hope co-captain Fred Sardisco of San Pedro will help novices. Joe Bark will provide boards for people to use. Bark, a legendary boardbuilder and longtime supporter of O2H, also has donated a stand-up paddleboard for a raffle. Tickets are $5 each or five for $20. California residents can send checks made out to the Sarcoma Alliance to: Ocean of Hope, 1714 Havemeyer Lane, Redondo Beach CA 90278.

O2H is the Sarcoma Alliance's biggest fundraising campaign, with members racing on paddleboards and in outrigger canoes in California and Hawaii. Unlike some races, the Paddle for Humanity events can easily be viewed from shore, and spectators don't have to pay.

“Come out and cheer on the paddlers,” Spector says. The events will be:

-- 5K. “Compete against friends or simply paddle for the pleasure of it. The 5K results will be applied to World Paddle Association (WPA) rankings,” the website says.

-- Distance Over Time Challenge. “How far can you paddle in 60 minutes to support your favorite charity? Each paddler will be given one hour to complete as many 1.6K laps as possible.”

-- Chuck Patterson Signature Series 5-lap Rally Race. “Four around a 1.6K course and one alternate lap that will involve an additional physical and/or mental challenge. Results will be applied to WPA rankings.”

“I was introduced to O2H by several very passionate members, and the camaraderie surrounding the organization within the paddling community is worthy of notice," says Pete Stirling, brand manager for Waterman’s Applied Science in Buena Park, Calif. The company makes sun-protection products designed for high-intensity water sports and endurance athletes. "Waterman’s Paddle for Humanity was looking to expand our humanitarian reach during 2012 and O2H seemed a natural partner. I love how the organization focuses on community and awareness without losing track of either.”

Paddle for Humanity started in 2009, according to its website. “Since that time, the race has grown to become the largest national paddling series and has raised thousands of dollars for its nonprofit partners.” 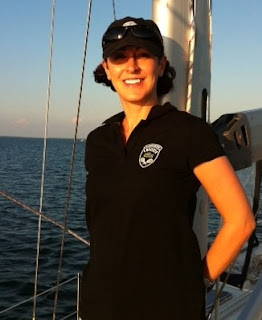 "I like getting outside and being active while contributing to a great cause," says JoEllen, an oncology nurse who plans to paddle on behalf of O2H in the Deerfield Beach event. She's in the photo at right. 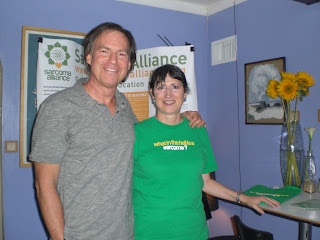 Ron Kabele, an eight-year survivor of metastatic leiomyosarcoma, has offered to staff a table at the Austin event. He's pictured with me

at last month's fundraiser in Austin.


The Sarcoma Alliance is seeking others who want to register on our behalf or sit at tables at the events in Deerfield Beach, Lake Tahoe and D.C. You don't need to be an expert on sarcoma -- we can provide educational materials.
Posted by Sarcoma Alliance at 1:59 PM No comments: 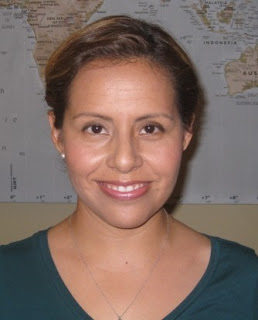 Women diagnosed with gynecologic sarcomas may be excited to hear about an effort to educate more oncologists as well as open more clinical trials.
The U.S. National Cancer Institute (NCI), the European Organisation for Research and Treatment of Cancer (EORTC) and the United Kingdom clinical trial system are working on an International Rare Cancer Initiative to design and fund trials, in hopes of improving treatment.
“I’ve been fighting LMS since 2010, and I’m happy to hear that there is collaboration between three reputable organizations who are sharing their research data to find a more effective treatment to help those with LMS,” said Nancy Bobick of Carlsbad (above), near San Diego. 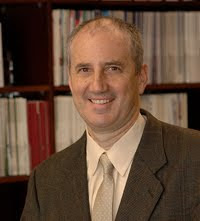 In a news release, Ted Trimble (right), M.D., M.P.H., director of the NCI’s Center for Global Health in Bethesda, Md., said: “This initiative will allow us to perform trials for cancers so rare that none of us could have managed it on our own. Working together like this allows us to reduce the cost of trials for each partner organization, to speed development and conduct of rare cancer clinical trials, and to harness worldwide expertise in these rare conditions.”
The initiative will start with these five:

The first clinical trial approved under this initiative will be for women with high-grade uterine leiomyosarcoma that hasn’t spread outside their uterus, said Martee Hensley (left), M.D., the initiative’s U.S. chair for gynecologic sarcomas. She is a medical oncologist at Memorial Sloan-Kettering Cancer Center and Associate Professor of Medicine at Weill Cornell Medical College in New York City.
After surgery, women can choose whether they want to participate in the randomized Phase III trial. Half will be observed closely, but get no chemo, while the other half will receive gemcitabine (Gemzar) plus docetaxel (Taxotere), followed by doxorubicin (Adriamycin). The trial should open in a few months, Dr. Hensley said, and it is expected to last six years.
It is similar to a trial she conducted as part of the Sarcoma Alliance for Research through Collaboration. She said the final results of that trial should be published in a year or so.
The research on uterine leiomyosarcoma may be of interest to others working on leiomyosarcoma in other parts of the body as well as other sarcomas, Dr. Trimble said. “But each sarcoma is a little bit different.”
Nancy Bobick, whose LMS arose in her pelvic area, hopes the research helps her. She has had four surgeries and six cycles of Gem/Tax. She has insurance with Kaiser Permanente, and she wanted to see an oncologist with expertise in LMS. Kaiser would not pay for her to see someone outside its system, she said. She paid for it herself, and the Sarcoma Alliance reimbursed some of her expenses. Three new tumors have grown, and she learned last week that at least one is LMS. She faces more chemo.
Dr. Hensley said she and her colleagues in the international initiative also are planning trials for low-grade endometrial stromal sarcoma and high-grade undifferentiated uterine sarcomas.
I got a chance to talk to Dr. Hensley and Mario M. Leitao, M.D., a gynecologic oncologist at MSKCC, at the annual meeting of the Society of Gynecology Oncologists in Austin last week. The Sarcoma Alliance has had a representative at the SGO annual meetings since 2006, and three of its board members have survived gynecologic leiomyosarcoma, including me.
Drs. Hensley and Leitao led an educational forum on the diagnosis and management of uterine sarcomas, and doctors packed the large meeting space. I talked to some of the SGO staff, and this is the first such forum that we can remember. This year, the SGO changed its format to have smaller educational forums that run concurrently so that it could present more topics.
MSKCC also has developed a nomogram to help predict the survival of women with uterine leiomyosarcoma. Biologist Joan Darling, Ph.D., president of the Sarcoma Alliance cautions survivors that the nomogram should not be used after six months because the chances of survival go up the longer a person stays cancer free.

"Also, remember that there is no such thing as percent survival with regard to a single person. As long as the survival rate is positive, even if small, someone survives -- might as well be all of us!" Joan wrote on our Facebook page.

Drs. Hensley, Leitao and their colleagues also had an article in this month’s Gynecologic Oncology journal about uterine LMS that expresses estrogen or progesterone receptors. Women with these tumors go longer without their cancer advancing, as compared with women whose LMS doesn’t express ER or PR, the article concluded.

Dr. Suzanne George, a sarcoma medical oncologist at the Dana-Farber Cancer Institute in Boston, has been conducting a prospective phase II study of letrozole (Femara) for patients with uterine LMS. Letrozole is an aromatase inhibitor (anti-estrogen drug) being tried in women whose LMS is receptive to estrogen.
In addition to current treatments and clinical trials, the SGO had intriguing posters on translational research. For example, gynecologic oncologist Matt Anderson, M.D., Ph.D., explained some of his:

“We have begun to comprehensively examine patterns of gene expression in uterine leiomyosarcoma, comparing them to both benign leiomyomas (fibroids) as well as healthy myometrium. We find that the overwhelming feature of uterine leiomyosarcomas (ULMS) is the overexpression of gene products that are involved in regulating a specific aspect of how cells control their proliferation. This feature is known as the 'G2-M cell cycle checkpoint’ and is frequently overexpressed in many cancers. Many different investigators have examined different genes involved in the G2-M cell cycle checkpoint and have found that they are frequently overexpressed in many other types of cancer. 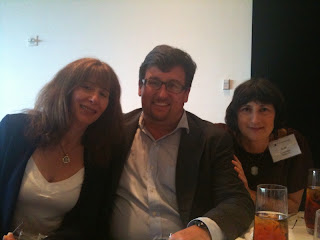 “However, what is unique about what we have done is that we have developed a very thorough global view of how patterns of gene expression have changed," said Dr. Anderson, director of clinical and translational cancer research in gynecologic oncology at Baylor College of Medicine in Houston. "This has allowed us to start to map out pathways that we think drive leiomyosarcomas to grow/spread as well as identify drugs that have been developed for other, much more common cancers that could be then used to treat women with ULMS.”
The photo above comes from the 2007 meeting of the Connective Tissue Oncology Society. Alliance board member Deborah Gates (at left), a longtime survivor of ULMS, and I were happy to see him because gynecologic oncologists rarely attend CTOS. The Sarcoma Alliance loves collaboration across disciplines.
Posted by Sarcoma Alliance at 10:41 AM 1 comment: