A resolution has been introduced into the U.S. House of Representatives to designate July as Sarcoma Awareness Month. It may not pass this month, but we need to keep working to get cosponsors, in hopes that it will be approved before next July. 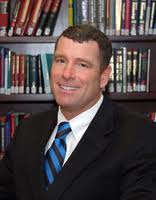 "Given that sarcomas represent a group of deadly, orphan cancers, raising awareness is of particular importance," said R. Lor Randall, MD, FACS, past president of the Connective Tissue Oncology Society. "Affecting the young and old indiscriminately, sarcomas can arise and spread to any part of the body. Funding for sarcoma research and care is disproportionately scarce. So, to wax awareness by choosing July as Sarcoma Awareness Month is a step in the right direction to help us better battle these nefarious and often publicly clandestine diseases."

"We wholeheartedly support this resolution," said Matt Alsante, executive director of the Sarcoma Foundation of America. "Patients often don't know that sarcoma nonprofits exist that can provide resources -- and hope." 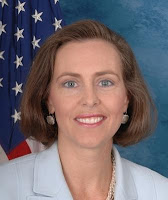 In 2007, the Sarcoma Alliance worked with the SFA, its sister organization, as well as the Northwest Sarcoma Foundation to gather support for July from other nonprofits.

I live in Tampa, in the district of U.S. Rep. Kathy Castor (D-FL), at left. The Alliance gives great thanks to her for introducing House Resolution 722, as well as to Reps. Joe Baca (D-CA) and Patrick Meehan (R-PA) for cosponsoring the resolution. 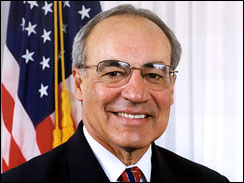 Brandon D. Ibarra, the Barbara Jordan Health Policy Scholar in Rep. Baca's Washington office, had contacted the Sarcoma Alliance to ask for our support of House Resolution 652, the Claire Frick Rhabdomyosarcoma Awareness Act. We told Rep. Baca, at right, about our resolution, and he quickly cosponsored it. This is what he said about Claire:

"Claire was only 16 years old when she was diagnosed with Stage 4 alveolar rhabdomyosarcoma, and lost her battle with the disease on March 1, 2012, at the age of 18. She fought for 20 months while continuing to sing in her school choir, participate with speech team debates, travel across the country, and maintain excellent grades, which placed her among the top in her class.

"During this time, Claire endured 35 rounds of chemotherapy, 58 days of radiation, 70 days in the hospital, seven surgeries, several MRIs, PET scans, bone scans, and bone marrow biopsies. She serves as a true inspiration to not only other children facing cancer, but to adults everywhere as well."

Because the Alliance hopes for bipartisan support, we were delighted to receive this message from Maureen Keith, communications director for Rep. Meehan, at left: "Congressman Meehan is honored to cosponsor the resolution in memory of Daniel Schultz’s life and his dedication to sarcoma awareness."

Dan, who lived in Bryn Mawr, Pa., had contacted the Sarcoma Alliance last year, offering to help get a resolution passed. This month, I messaged him with the good news that a resolution had been introduced, only to get a reply from his wife, Susan, saying he had passed away in June.

"I would do anything to help promote awareness," she replied. "Each day seems to get harder right now as reality sets in."

She sent what Dan had written about Sarcoma Awareness Month a year ago on his CaringBridge site:


"Such a designation will help elevate the status of sarcoma with the American Cancer Society and in other ways, which will bring information to light in more relevant/visible places. Many of my family and friends have outreached to our congresspersons. 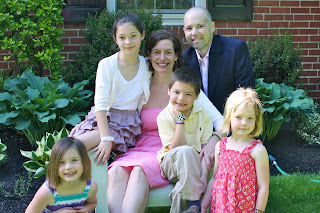 "Sarcoma is a rare and nasty cancer," wrote Dan, who had undiffer- entiated pleo- morphic sarcoma. Doctors often misdiagnose sarcoma, it's hard to treat and "tends to be deadly or disfiguring." He got a miracle: a good response to chemotherapy for months.


"We have also been fortunate to have, between Penn and Mayo, access to world-renowned health care and to have fantastic, ongoing support from everyone around us.

"So after waking up to my morning ritual of self-reflection yesterday morning and asking for God’s strength as I enter into my 8th round of chemo for this drug regimen on Monday, He granted me one of the best reminders of what life is really all about. We celebrated our 15-year reunion from Villanova with some old college friends. Spending the day connecting with great friends and watching our children play together was an honor and a blessing. Yesterday I met my objective...I had fun with my wife and kids, I listened to my friends talk about their joys and sorrows and I realized all that is great in my life!"

In December, I featured Dan and Joni Freedman of Palm Harbor, Fla., who's now in hospice. Compared with the blog photo in December, there's a poignant difference in 9-year-old Madelyn's expression in the more recent photo above. The 6-year-old triplets are, from the left, Avery, Quinn and Sadie.

Joni's representative is Congressman Gus Bilirakis, R-FL. We are eager to hear if he can support the resolution, too.

To read more about Sarcoma Awareness Month, click here. Emailing, writing and calling are the most effective ways to get your representative to cosponsor our resolution. But we also have started a petition here. If you fill in your information, an email will be sent to your representative. Only your name, state and comment will show up on the petition site.
Posted by Sarcoma Alliance at 3:25 PM No comments:


The 23andMe Sarcoma Research Initiative is very close to reaching the 1,000 patient recruitment milestone. They currently have 986 individuals enrolled. They are making a final call for participants over the next week so this is the last time for anyone who has considered participating to do so before enrollment closes. It is very simple to participate; only a mouth swab is required. They are very excited about this progress and look forward to continuing to work with the Sarcoma Alliance, patient partners, and their scientific advisors to analyze the data and move the research forward.

The Swing for Sarcoma was a great success, netting about $2,000 for the Sarcoma Alliance as well as connecting sarcoma patients and advocates.

About 70 people attended the concert at the First Unitarian Church of Dallas. Up first was Stevie Stix & the Uptown 6, the church's acclaimed jazz combo, followed by Merry and the Mood Swings, a 2010 Grammy contender. 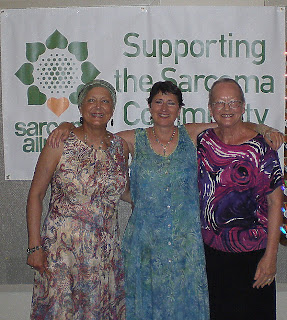 In addition to Mary, the other organizers were Francoise Colley of Coppell, on the left, Jean Walton of Bedford on the right and me in the middle. Jean's husband Dennis, daughter Amelia and granddaughter Maddy helped with the set-up.

We three donated items to the silent auction. Below, Arden Tubbs looks at a Christian Dior scarf.

The Sarcoma Alliance was honored to have representatives from three nonprofits based in the Dallas area. We talked about ways that we could collaborate. 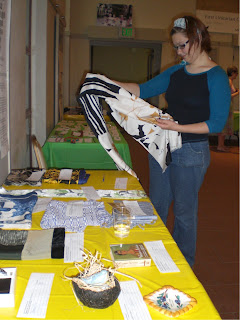 Mac and Lisa Tichenor run the QuadW Foundation in honor of their son, Willie. They give grants for sarcoma research, among other causes. Carol and David Basso created the 1Million4Anna foundation this year in their daughter's name. They raise money for Ewing's research and give scholarships to Ewing’s patients.

Also new this year is the Eric D. Davis Sarcoma Foundation, founded by his daughter Nia and wife Zanetta. (Nia's cousin, Carlton Trigg, also attended.) The foundation raises money for research, and its Provide the Assist program gives travel grants up to $500 to patients who go to the University of Texas-Southwestern Harold C. Simmons Comprehensive Cancer Center in Dallas or the UT M.D. Anderson Cancer Center in Houston.

This complements the Sarcoma Alliance's Assistance Fund, which also gives grants up to $500 to reimburse the expenses of getting a second opinion from sarcoma experts.

If you live in the Dallas-Fort Worth area, drop by the Applebee's in Garland on July 14 for a Flapjack Fundraiser for the Davis Foundation.

Speaking of delicious food, the Main Bakery in Grapevine was our most generous donor in that regard: three trays of mini-sandwiches stuffed with chicken salad, turkey and Swiss cheese, and tomato and pesto; and a tray of lemon bars, brownies and raspberry nut bars. 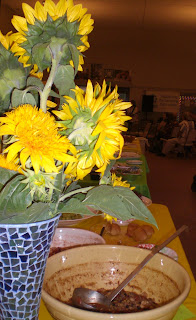 Our great thanks to the church, the businesses and all the people who helped out in one way or another. As a sarcoma patient myself, I can say: We can never repay what so many kind people have done for us.

Posted by Sarcoma Alliance at 3:17 PM No comments: